The Cross with Crucifix

To the Liebfrauen Parish

Please let the German-language document be translated into many languages and be handed over to the right persons.

Make every Effort to enter through the Narrow Door; Gospel of Luke 13, 22-30

Today, on the 21st Sunday in the cycle of the year, my person once again followed the service via TV and would like to share some very elementary knowledge, but not actually give any instruction.

It was a very festive and beautiful service and really worth listening to and watching, especially because of the beautiful church of St. Ludger and the church choir.

However, one thing struck me immediately; it was the actual focal point of the beautiful church and this focal point seemed very real to me, as my person already found a similar cross in the Holy-Spirit-Parish in Luebeck many years ago.

This focal point was the cross with crucifix, which was probably made of metal and showed an emaciated, contracted body of Christ hanging in chains above the altar.

Fittingly, a netting of the same material was visible under the altar, which was presumably fitted into this beautiful church afterwards and which will certainly also apply to the cross described.

Nevertheless, this ugly image of Jesus Christ is still better than if a beautiful painting by a model or actor had been used as a kind of photomontage instead of the cross and no true image of the Lord was available for the children.

The sermon was also tailored to the spirit of the times and almost hit the core.

At the beginning of the sermon you said, Father R., that this above-mentioned Gospel was not easy for man to understand, because it contained contradictions in itself compared to the Olympic Games.

But what is really very difficult to understand in the Gospels or in the " New Testament" is the Revelation of John, which seems to be the greatest challenge of all theology.

One thing I liked quite a bit during the Eucharistic celebration was that Father R. said that we should not lose sight of the real goal of our lives, but he fixed this exclusively on one's own being in his homily, forgetting that one can only get through this narrow door if one's life includes one's fellow human beings, which became quite clear in the First Reading of Isaiah.

For not only those who were able to receive baptism and thus had or have the possibility to come through this narrow door, which in Isaiah 66:18-20 is to be understood specifically for the end time of one's own life for every human being, but all people of all tongues coming from all directions will be brought together and everyone will be given the possibility to recognise the Lord in order to be able to come through the narrow door.

This is a very decisive basic statement of the Lord, which additionally makes it clear that he has exclusively chosen men as priests for this task.

Now, however, a woman writes to you who has "escaped" and has been sent to the nations and distant islands, but the implementation of world journeys for many Christians and people of other faiths is still in the offing.

So my person would like to inform you and others herewith that we have been moving in the end of time for years, which you will clearly not yet have recognised through your sermon, although all the signs of the times should have been taken seriously long ago, especially if you have these starting bases of the Old and New Testaments or the Bible as a Christian.

You left out the Epistle to the Hebrews of the 21st Sunday in the cycle of the year 12,5-7, 11-13 from today's Eucharistic celebration, because it seems to be too elaborate for a sermon that was in the present, but nevertheless missed reality, because the end of time is already foreseeable, but for this preparation of the way, some things have already been worked through and commissioned, among others * by my person.

To this commission belongs, similar to a German fairy tale known to us, a solid, Monumental Cudgel (rod), which should absolutely become my tool, because otherwise there would be no chance for the realisation of an uniquely worldwide fairy tale, whereby a worldwide uniform culture will be striven for.

In other words, my person will certainly and exclusively have to reconcile these different faiths and beliefs alone, since otherwise bloodshed and wars would be the result of this preparation of the way, which by no means matters that every person does not have to ensure that his/her and other fellow human beings must also be given the opportunity to be able to pass through this narrow door mentioned today.

If it were exclusively about the end of time on earth, then a priestly man would have been sent to the islands, because this connection towards the Divine would be a direct one, but it goes to very distant islands and the whole matter finally ends, as confirmed today by the declared tabernacle in St. Ludger by "Phoenix in the ...................".

Today the "Good News" fits in quite simply and understandably with the Lord's matter and commission, to make known some of my knowledge one last time as a gift.

But there is one thing my person must make very clear once again:

You as the true clergy including all your clergy have always been the first before God, which is considered a natural law by following Christ and is testamentary in our Christian faith, but the Good News for the coming week says: "So some of the last will be first and some of the first will be last."

For this reason, my person has taken the liberty of drawing up bills addressed to the rich institution of the Evangelical Church in Germany and to our Roman Catholic Church, whereby these bills must be settled as soon as possible, because at the latest at the end of time the money must be invested in life by ending wars and satisfying hunger in the world; in addition, there is absolutely the ending of every abortion worldwide and some more, which you and others can please take from my various homepages, because otherwise many of the first will not get through the narrow door, for sure!

I will have to include this document in the homepage mentioned below, which is to be distributed as a mailing list to all those concerned.

So I remain with kind regards,

* The cross of a parish in Halle an der Saale, which could be seen on TV last Sunday, the 31st Sunday in the cycle of the year, probably frightened every small child at first.

There was nothing natural, nothing reassuring and nothing beautiful about the cross, but a frighteningly ugly image of our Lord Jesus was on display. The other matching sculptures of saints I could only make out indistinctly from a distance, but I could tell from the colour that they must have been created by the same "artist".

This and so much more will have to be a topic again!

Extract from the Internet of the St. Ludger Church 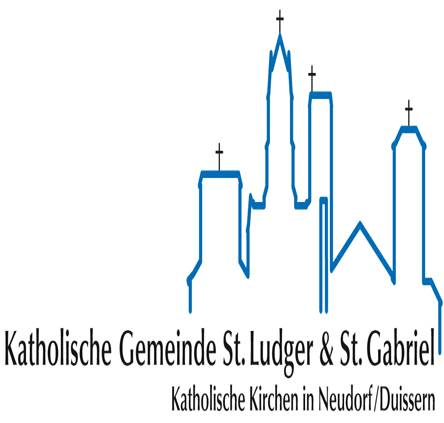 The high choir windows are the work of Trude Dinnendahl, Kaiserwerth.

Here is depicted that mighty vision of the Evangelist John in which no one is found who is allowed to open the book with the seven seals.

This book is a symbol of the divine world plan. Its unsealing means: realisation of the judgement that is given to the Son. He receives this book as the Lamb of God. (Rev. 5,8ff) You may end your tour with the contemplation of the main portal, which admittedly is not one of the most artistically valuable pieces of the church.

In the middle of the arched field, the tympanum, the statue of the parish patron St. Ludger towers above you. His left foot stands on a dragon's head. This is intended as a symbol of paganism. An inscription at his feet makes this clear. It is taken from a hymn from the feast of St Ludger and reads: